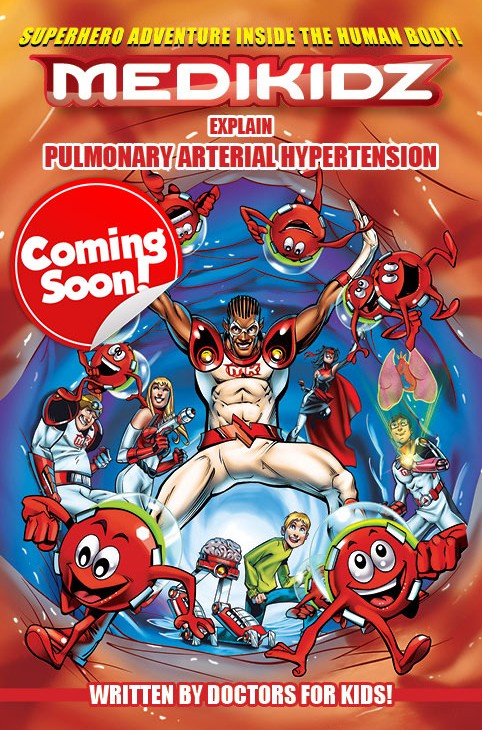 The latest comic book in a peer-reviewed series on pulmonary hypertension (PH) has been launched by Medikidz, with the collaboration of the Imperial College Healthcare NHS Trust. The comic book, entitled Medikidz Explains Pulmonary Arterial Hypertension, aims to increase knowledge about the life-threatening disease among younger audiences.

Dr. Simon Gibbs, a cardiologist who consulted on the project along with clinical nurse specialist Wendy Gin-Sing, both of whom work at the Imperial College Healthcare NHS Trust, worked with Medikidz to develop the comic book. “PAH is twice as likely to affect women as men. Sadly, young women often find out they have this disease just after they have started a family, and realise they cannot easily run around after their young children without getting out of breath,” explained Dr. Gibbs in a press release.

“We regularly see children who find what is happening to their mum very scary and we felt it was important to have a simple, child-friendly way to explain PAH to them and we hope that this comic book does that,” added Gin-Sing about the project, which also received input from the patient organization Pulmonary Hypertension Association-United Kingdom.

The story of the comic book is inspired by the life of Jocelyn Barker, a PAH patient who was diagnosed with the disease in 1996, and her son Caleb. In the book, Caleb and the Medikidz superheroes visit a planet called Mediland that is shaped like the human body. There, Caleb learns about the symptoms experienced by PAH patients, the diagnosis and management of the disease, and current therapeutic approaches to treat it. It is not always easy to explain diseases to children, but the comic book aims to address common questions and concerns expressed by youngsters with PAH patients as parents.

“Medikidz Explain Pulmonary Arterial Hypertension” is expected to not only increase knowledge and understanding about the disease, but also to support adults who struggle to clearly articulate the condition and its effects to their children. Despite being a rare disease, PAH is severe and life-threatening. The condition is characterized by high blood pressure in the pulmonary arteries that transport blood from the right heart ventricle to the lungs, leading to symptoms like shortness of breath and fatigue.

The comic book will be formally launched during “PHAntastic,” the PHA UK’s 15th anniversary celebration weekend, to be held between October 30 and November 1. The comic book is already available from Hammersmith Hospital via the Pulmonary Hypertension Specialist Team at Imperial College Healthcare NHS Trust, and the Pulmonary Hypertension Association UK (PHA UK) here. The book’s production was sponsored by Actelion Pharmaceutical UK Ltd., which was not involved in the content.

The article was originally published in Pulmonary Hypertension News.