Hellenic Pulmonary Hypertension came in third place for Best World PH Day campaign. The recognition of the efforts of our newborn association fills us with pride and a sense of responsibility for trying even harder! 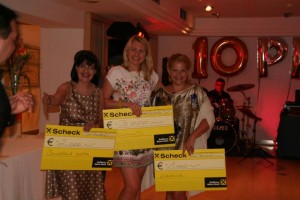 The three winners for best World PH Day campaign: (from left to right)
Natalia Maeva from Bulgaria, Agnieszka Bartosiewicz from Poland, and Ioanna Alissandratou from Greece

This year’s GAM marked PHA Europe’s tenth anniversary. During his welcome speech the President briefly told the participants the history of the organization. It all started in September 2003 in Vienna, thanks to the initiative of the late Bruno Kopp (President of PHeV, the German PH association). Bruno had organized a booth for PH at the European Respiratory Society’s annual congress and had invited a small group of PH Leaders from eight European countries to attend. At this meeting there was great enthusiasm at being together for the first time and all recognized the great potential of joining forces, so that it was very quickly decided to create a European association. As the years went by new national associations joined, many with the support of PHA Europe. The association has become increasingly structured and and organized and it’s membership currently stands at 29 patient associations from 25 countries.

Full report and photos of the 2013 GAM on the Winter 2013 edition of the Mariposa Journal at: Mariposa Winter 2013